Inu x Boku SS has been one of my favorite anime’s ever since it has been released, and one of the reasons why would be it’s different endings. This is one of the few anime’s I know that changes endings every other episodes and not to mention they represent the characters of the anime. For today’s post we’ll be focusing on the anime’s first ending Nirvana made by the artist Mucc!

Warning: This contains spoilers from the Anime. You have been warned. This is a more in depth review on the OP/ED of the anime.

If you’re wondering why I called this an ED & OP Review it’s because this song was made as the OP until the tenth episode of the anime and became the ending song after, this as well was shown in the first episode as it’s ending song.

The Ending is called Nirvana which was performed by the Japanese band named Mucc. The first thing I want to commend about is the song itself, it’s music is very catchy and I remember making this song my alarm to wake up every morning to get to school. After listening to this music once again it felt nostalgic and it’s emotional aspect still remains up to now.

It’s not your typical ending where it represents just the anime itself and just for show with it’s well made music but it also tells more of a story with the character shown in the ending which is for Miketsukami.

What I’ve notice is that it also spoils the anime a bit about his past since it continues on being an ED until they properly explained about Miketsukami’s past.

This OP/ED explains about how Miketsukami was sealed in a room as a child with it being shown in a room with only a window opened. He had a red paper airplane in his hand and threw it and let it fly out of the window which can be represented as the letters that he’s written to the Ririchiyo.

You can tell from the way he looked at the red airplane that he held it dear and it meant a lot to him, just like how he expressed in the anime that her letters saved him.

In the next scene we see Ririchiyo when she was a child walking down a path with tall figures around her, from this we can tell how she felt alone all those times and how she had a hard time communicating with others even as a child.

Then we pan into a room where she’s alone in her bedroom, there we see a heart-shaped cake that’s being cut up, nailed on, and carved, and we can see it bleeding, this represents her own heart and the pain she had gone through as she grew up. Then there is a flash of her in her youkai form which is the main cause and source of her pain. 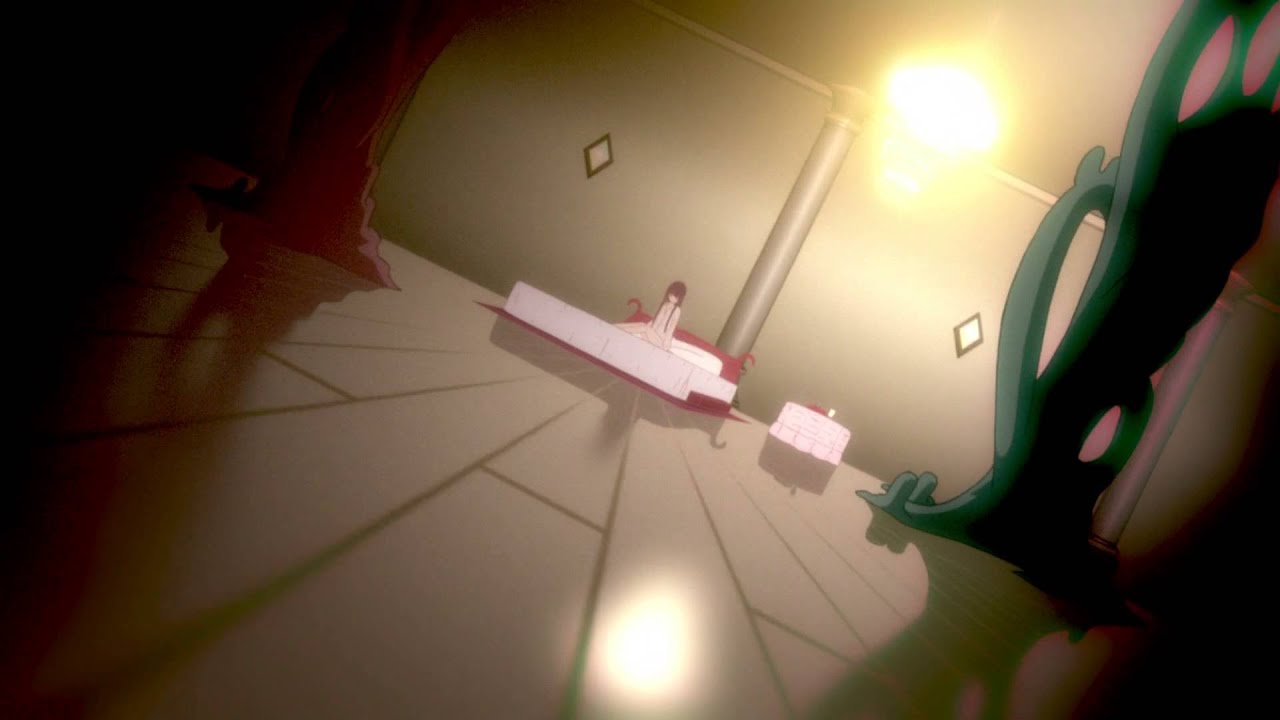 Then we could see her desperately get of her bed wanting to run away from her source of pain, reaching for the door for a way out. When she opened the door it revealed nothing but a dark and empty room. This comes to show that she’s isolated herself from the outside world and has been alone ever since.

Then it goes to a hallway from the apartment complex she currently lives in with other youkai’s that she had met, with that in the end of the hallway comes a red airplane flying and landing on her lap.

It was the same red paper airplane from earlier that Miketsukami had thrown, this could represent his letter for her since they’ve been exchanging letters ever since. When she picked up the letter all the flowers from the dark room then bloom, then was revealed that the room itself was a flower that was yet to blossom. This could also be shown as how Miketsukami’s letter had opened her heart and blossomed her to become more open to the outside world.

The red paper airplane then becomes Miketsukami’s hand holding onto her hand and kisses it, he shown so much emotion of care and love towards her which always tears me up when watching this.

If you’re wondering why I went into full indepth review with this OP/ED it’s because the creator did a beautiful job of foreshadowing each ending about the different characters of the anime. For this OP/ED it explains about Ririchiyo’s and Miketsukami’s whole relationship and how they saved each other’s pain. The anime series itself explains it as well but this song just did a great job in explaining it in a matter for three minutes!

Considering on how simple the anime was they made a great job in delivering the music.

In my opinion I will never grow old for this song, this song will always make me cry and of course I would still wish there would be a second season for this anime. But rest in peace for the creator Cocoa Fujiwara, the creator of the Manga itself. She created a beautiful piece and I will never forget how much this manga had made me feel when I was younger.

Today’s post is a bit different from my other OP & ED Reviews and I hope you guys liked it!

But that’s all for todays OP & ED Review! I of course would love to hear about your thoughts as well. Don’t forget to give this review a like if you enjoyed these kinds of content, and as well as to follow Sakuranism for more updated posts of weekly anime content!

See you next time!